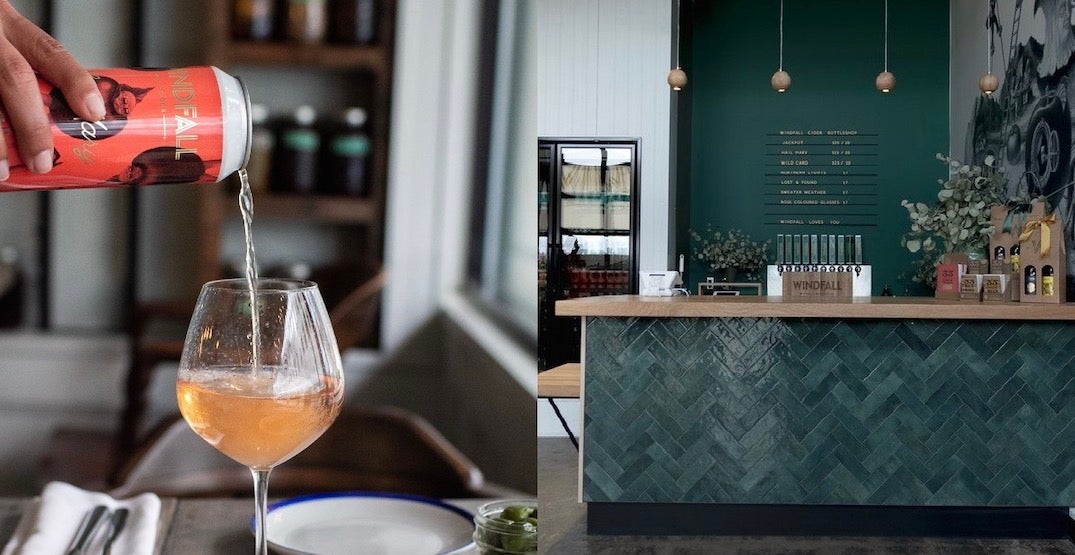 Nathaly and Jeff Nairn have vision. You can taste it in their array of concise dry ciders, and now from a new food menu that elevates their tasting room to a food and drink destination.

If you’ve been keeping an eye on the Lower Mainland’s restaurant scene, you likely noticed the name Douglas Lee pop up.

The 24-year-old chef has cooked at several well-known Vancouver restaurants including Hapa Izakaya, Nightingale and most recently Winston on Lonsdale, where he garnered rave reviews for his adventurous approach to farm-to-table fare.

Now, chef Lee is turning out some of the tastiest dishes around from a tiny kitchen in the back of Windfall Cider, one of the newest additions to North Vancouver’s row of breweries (and distillery), at 250 Esplanade East.

Co-owner Nathaly Nairn explains that she and Lee worked together in 2019 while opening Caffè La Tana, which was recently named best Italian by Vancouver Magazine.

“We connected over a passion for approachable yet uncompromising service – food that is surprising and delicious, and brings people together,” she said.

Nairn said one of the core concepts behind Windfall has been to highlight cider’s pairing ability with food, and show consumers how cider can rival wine in that regard. “[Lee’s] involvement in the kitchen allows us to do just that on the scale that we dreamed of.”

Windfall’s food offerings include a generous happy hour list alongside $5 ciders in the afternoon, as well as a full after-5 p.m. dinner menu.

When making the menu, Nairn said it was crafted primarily around seasonability, cider pairability and minimal food waste. “Chef’s focus on ‘unsung heroes’ ingredients allows for his creativity to take the driver’s seat and shine on the plate.”

And she’s right. Many of Lee’s choices aren’t what you’d typically see in starring roles at other local restaurants: trout, kohlrabi, flank. But you’d wonder why after a meal at Windfall.

Turning now to my own meal I enjoyed Thursday evening, I confess that my order was somewhat limited in range. I wanted to sample the “Secret Business” tasting menu ($45), but that requires everyone at your table to be on board.

However, I quickly dried my hungry tears (drool?) when the food I did order arrived.

I’ll start with my favourite: Smokey Trout ($15). What begins as a visual feast – photographers will appreciate the savvy application of contrast and rule of thirds – fast evolves into a closing-your-eyes-its-so-good experience. The tender slices of smoked fish are complemented by hits of bitter and umami from horseradish and seaweed sauces.

Next up, another pretty plate: BBQ Cabbage Caesar ($20). Cut through the soft, warm cabbage leaves and cover them in the pink peppercorn dressing – the result is a familiar savoury Caesar flavour, updated with a solid kick from the pepper. The miniature croutons on the plate, which provide a welcome crunch, are not to be overlooked. While I got plenty of pleasure from my dairy-free option, I imagine the double-cheese version is superior for those who can stomach lactose.

Lee’s keen touch with plant-forward plates is obvious when I switched to another vegetarian dish with a completely different flavour profile. The cold Kolrabi ($10) dish, is an umami bomb that manages to balance out with ample acid, bitterness and heat.

As for how cider pairs with food overall, it’s tough to make a comparison with wine. In my opinion, they drink differently. At the end of the day, wine is more complex, so your choice depends on what you’re looking for: a nuanced marriage of flavours or a refreshing counterplay. But craft ciders, at least the dry type made at Windfall, might have a leg up on craft beer – much of which will demand too much attention from your tastebuds.

On a similar note, I’d recommend pairing your meal at the North Vancouver cidery with a drink that isn’t too big on flavour. In my flight ($12), the Cidra was tasty but its tartness took over when next to food. On the other hand, both the Harvest Moon and especially Higher Education were refreshing pairing options with just the right amount of personality.

I look forward to trying what I missed on my first go at the new menu – on a fun Saturday night out, or maybe if one of my gloomy weekdays needs a windfall.