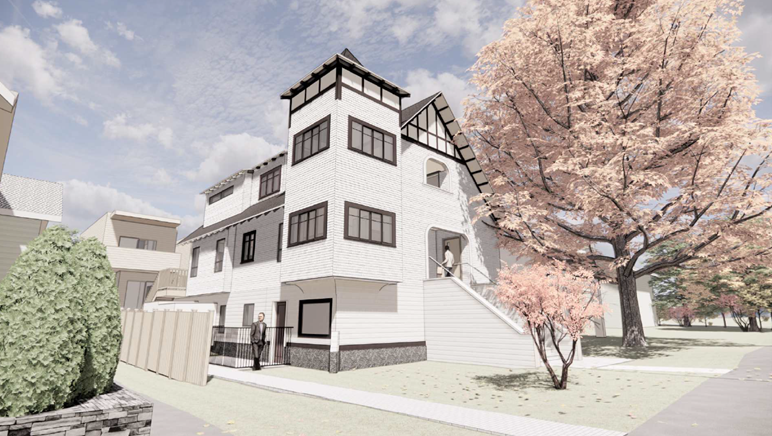 Don’t fret – Hansel and Gretel will still have a place to live in North Vancouver, along with some friends, as the city’s only storybook-style house was approved for heritage revitalization on Monday (July 11) night.
The unique home, which was previously zoned for single family use with a heritage ‘A’ status, will be redeveloped into four units – a duplex in the current structure, and two in-fill units out the back. The development also includes four parking stalls.

Built in 1909 on West 14th Street in between Mahon and Jones Avenues, the house, also known as The Knowles Residence, is recognized by the city “as a significant historical building within the neighbourhood, combining European house elements with arts and crafts influence.”

Storybook-style, according to the Vancouver Heritage Foundation, is an interwar style, inspired by English cottages and closely related to Tudor Revival. Also known as Cotswold Cottages, English Country Cottages, Ann Hathaway Cottages, and even “Hansel and Gretel” houses, for those which are more stylized. The foundation says they “evoke the romanticized English countryside seen, for example, in 19th century watercolours of rustic scenes.”

Jennifer Clay, the vice president of the North Shore Heritage Foundation, told council that the redevelopment shows how a heritage home can be restored, in return for stratifying the property.

“And the two infill units at the back are a perfect example of how densification can be added in a sensitive manner,” she said.
Clay also noted the turret which sits atop the house is something that cannot be seen anywhere else in the City of North Van.

“As a reminder, we'd also like to add that this house could be torn down and a brand-new development could likely be built, more quickly and at a lower cost. The greenest building is the one already built, and this is the most environmentally friendly approach for this property,” she said to council.

The motion passed unanimously, with Coun. Tony Valente absent due to a COVID-19 infection. Coun. Angela Girard said that by passing the motion, not only is council supporting the restoration of the building, it is also supporting the building out of smaller home ownership parcels, “which are definitely in high demand in the city.”

“I really liked the fact that the existing heritage building will be a duplex, again creating a more affordable housing option for many trying to get into a single detached home neighbourhood,” Girard noted. “And with each having these lock-off units which can be rented out, this is again rental revenue that can support a larger mortgage, or the lockups can be used for a family wanting to live on site.”

In support, Coun. Holly Back noted that the basement level of the dwelling is ground level, and therefore accessible for folks who use mobility devices.

“I think it’s quite unique, because most of the basements are below ground and not accessible for wheelchairs," she said. "I think it's a beautiful project and the heritage part of it is awesome."
Original article from: https://www.nsnews.com